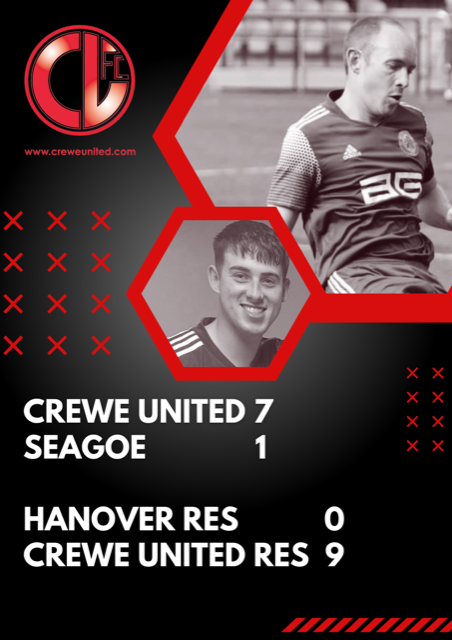 Recent signing from Moyola Park, Thomas Robinson, grabbed the headlines on Saturday with a hattrick and superb performance to help the First team seal a convincing 7-1 win over Seagoe at Crewe Park. The Reserves were also amongst the goals hitting nine without reply in their visit to Hanover as Ryan Kelly also bagged himself three goals in the process.

It was a Happy New Year for Crewe with a resounding win against Seagoe to extend the clubs unbelievable unbeaten league record which now stretches back to August 2021.

The game started evenly enough and Seagoe created a couple of chances which they may feel they should have done better with in the opening ten minutes. However Crewe grew into the game and as their pressure grew, Robinson popped up with his first of the game on 18 minutes to get the scoring for the day underway after a super shot from the edge of the box which was down low and out of the keepers reach.

He added a second on 25 minutes with a finished from inside the 6 yard box after a cross from Tiernan McAuley and Crewe looked in control of the game as they saw out the rest of the half without Matson in the Crewe goal being tested.

The second half opened up as a lively affair with both sides attacking from the off. After a good spell of pressure Marcus Stephenson pulled Seagoe back into the game on 58 minutes with a good finish inside the box after a dangerous corner had been whipped into the Crewe area.

Just when the visitors thought they might get something out of the game Ciaran Murphy popped up 2 minutes later to restore Crewe’s two goal advantage with a tap in from 2 yards out. Gerard McMullan scored on his return from injury in the 70th minute after a superb ball fed through by Aaron Harmon and a lovely finish under the advancing keeper. Robinson scored a superb goal from 25 years to seal his hattrick and ensured that all 3 points were staying at Crewe Park.

Ryan Kelly got amongst the goals with a tap in on the 82nd minute after McCullins spilled a cross from McAuley and the evergreen centre half Michael McQuitty contributed with a lovely placed finish into the bottom corner on 86 minutes to complete a resounding victory.

The Reserves were back in action as they travelled to Brownstown Park to take on basement side Hanover and Ryan Kelly made it another hattrick amongst the senior teams with his 3 goals. It took 19 minutes to break the deadlock as the ever reliable Joe McKee got his first of the day on 19 minutes.

It wasn’t long before Massie Skillen, on his return to the club after a short spell at Donegal Celtic, got back amongst the goals just 3 minutes later. Ryan Kelly and Joe McKee again added another two goals before the break to all but seal the points.

Jordan Adams chipped in with a goal on 46 minutes with David Young and Ronan Hamill adding another two goals to make it seven with a few minutes of the game left. However there was still time for another brace from Ryan Kelly to add to his first half goal and chalk up another hattrick for the club in his growing goals tally for the Glenavy men.

This weekend the First travel to Red Star in Armagh in Round 2 of the Marshall Cup while the Reserves entertain Craigavon City Reserves in the Wilmor Johnston Memorial Cup.